“The Promised Land Was Not Heaven”

It was and is a FIGHT!
It takes faith and obedience to walk in, and possess the promises of God...It takes divinely inspired vision to reach for the impossible!
Point 1.  What does it mean to “Possess”?
The word “Possess” in its biblical context usually means to “acquire” through struggle, or believe this promised “possession or acquisition” is sure but not yet seen. In one case the struggle is external, and in the other it is internal. One promise is acquired by “overcoming” the fear of insurmountable visible obstacles, the other is the internal struggle described in Romans 7 & 8 flesh vs. spirit. One of the most prominent examples of the failure to “Possess a Promise” from God is found in …
Numbers 14:1 And all the congregation lifted up their voice, and cried; and the people wept that night.
Numbers 14:2 And all the children of Israel murmured against Moses and against Aaron: and the whole congregation said unto them, Would God that we had died in the land of Egypt! Or would God we had died in this wilderness!
Numbers 14:3 And wherefore hath the LORD brought us unto this land, to fall by the sword, that our wives and our children should be a prey? Was it not better for us to return into Egypt?
Numbers 14:4 And they said one to another, Let us make a captain, and let us return into Egypt.
Numbers 14:5 Then Moses and Aaron fell on their faces before all the assembly of the congregation of the children of Israel.
Numbers 14:6 And Joshua the son of Nun, and Caleb the son of Jephunneh, which were of them that searched the land, rent their clothes:
Numbers 14:7 and they spake unto all the company of the children of Israel, saying, the land, which we passed through to search it, is an exceeding good land.
Numbers 14:8 If the LORD delight in us, then he will bring us into this land, and give it us; a land, which floweth with milk and honey.
Numbers 14:9 Only rebel not ye against the LORD, neither fear ye the people of the land; for they are bread for us: their defense is departed from them, and the LORD is with us: fear them not.
Hebrews 6:11 And we desire that every one of you do show the same diligence to the full assurance of hope unto the end:
Hebrews 6:12 That ye be not slothful, but followers of them who through faith and patience inherit the promises.
Hebrews 6:13 For when God made promise to Abraham, because he could swear by no greater, he swore by himself,
Hebrews 6:14 Saying, Surely blessing I will bless thee, and multiplying I will multiply thee.
Hebrews 6:15 And so, after he had patiently endured, he obtained the promise.
Hebrews 6:16 For men verily swear by the greater: and an oath for confirmation is to them an end of all strife.
Hebrews 6:17 Wherein God, willing more abundantly to show unto the heirs of promise the immutability of his counsel, confirmed it by an oath:
Hebrews 6:18 That by two immutable things, in which it was impossible for God to lie, we might have a strong consolation, who have fled for refuge to lay hold upon the hope set before us:
Hebrews 6:19 Which hope we have as an anchor of the soul, both sure and steadfast, and which entered into that within the veil;
Hebrews 6:20 Whither the forerunner is for us entered, even Jesus, made an high priest for ever after the order of Melchisedec.
Romans 7:22 For I delight in the law of God after the inward man:
Romans 7:23 But I see another law in my members, warring against the law of my mind, and bringing me into captivity to the law of sin which is in my members.
Romans 7:24 O wretched man that I am! who shall deliver me from the body of this death?
Romans 7:25 I thank God through Jesus Christ our Lord. So then with the mind I I serve the law of God; but with the flesh the law of sin.
Romans 8:1 There is therefore now no condemnation to them that are in Christ Jesus, who walk not after the flesh, but after the Spirit.
Romans 8:2 For the law of the Spirit of life in Christ Jesus hath made me free from the law of sin and death.
Romans 8:3 For what the law could not do, in that it was weak through the flesh, God sending his own Son in the likeness of sinful flesh, and for sin, condemned sin in the flesh:
Romans 8:4 That the righteousness of the law might be fulfilled in us, who walk not after the flesh, but after the Spirit.
Romans 8:11 But if the Spirit of him that raised up Jesus from the dead dwell in you, he that raised up Christ from the dead shall also quicken your mortal bodies by his Spirit that dwelleth in you.
Romans 8:12 Therefore, brethren, we are debtors, not to the flesh, to live after the flesh.
Romans 8:13 For if ye live after the flesh, ye shall die: but if ye through the Spirit do mortify the deeds of the body, ye shall live.
Romans 8:14 For as many as are led by the Spirit of God, they are the sons of God.
Romans 8:15 For ye have not received the spirit of bondage again to fear; but ye have received the Spirit of adoption, whereby we cry, Abba, Father.
Romans 8:16 The Spirit itself beareth witness with our spirit, that we are the children of God:
Romans 8:17 And if children, then heirs; heirs of God, and joint-heirs with Christ; if so be that we suffer with him, that we may be also glorified together.
Romans 8:18 For I reckon that the sufferings of this present time are not worthy to be compared with the glory which shall be revealed in us.


Point 2. The “Promised Land” is not heaven! It has to be “Possessed”
The advisory of our soul is already defeated and he knows it, but he’s still busy!
On their first approach to the Jordan River in the book of  Numbers chapters 13 & 14, the people failed to “Possess” the promise because of an evil spirit of “Unbelief”, only two men Joshua and Caleb believed it was possible. They put up with the murmuring and multitude for forty years, and was the only ones of their generation to “Crossover into the promised Land”. Though the land flowed with milk and honey it had walled cities and Iron chariots, and giant warriors. The funny thing about the intelligence report from the first city to fall to them Jericho was the fact that they were already defeated 40 years before!
Matthew 11:12 And from the days of John the Baptist until now the kingdom of heaven suffereth violence, and the violent take it by force.
1 Timothy 6:12 Fight the good fight of faith, lay hold on eternal life, whereunto thou art also called, and hast professed a good profession before many witnesses.
Luke 21:19 In your patience possess ye your souls.
Luke 10:17 And the seventy returned again with joy, saying, Lord, even the devils are subject unto us through thy name.
Luke 10:18 And he said unto them, I beheld Satan as lightning fall from heaven.
Luke 10:19 Behold, I give unto you power to tread on serpents and scorpions, and over all the power of the enemy: and nothing shall by any means hurt you.
Luke 10:20 Notwithstanding in this rejoice not, that the spirits are subject unto you; but rather rejoice, because your names are written in heaven.
2 Timothy 2:1 Thou therefore, my son, be strong in the grace that is in Christ Jesus.
2 Timothy 2:2 And the things that thou hast heard of me among many witnesses, the same commit thou to faithful men, who shall be able to teach others also.
2 Timothy 2:3 Thou therefore endure hardness, as a good soldier of Jesus Christ.
2 Timothy 2:4 No man that warreth entangles himself with the affairs of this life; that he may please him who hath chosen him to be a soldier.
Point 3. Partial obedience is not obedience…
The command to go and possess the land was not completed until the reign of King David…The book of Judges illustrates how the people discontinued the struggle after the death of Joshua & Caleb (Judges 21:25 In those days there was no king in Israel: every man did that which was right in his own eyes) and the reality that compromise comes with a cost, is made evident as they fall into the bondage of the enemy 7 times requiring the Lord to raise up a judge to deliver them each time. Then there was King Saul who was more concerned with holding onto power than executing God’s will. It was about ritual and not relationship…Samuel had to tell him “Obedience is better than sacrifice”…The command was to “Possess the Land” which meant to simply “Overcome” and “Drive out” the enemy! Our ability to execute God’s plan for our lives and inherit or possess his promise is found in our obedience and submission, and determination to be “Overcomers”… This word is found in various contexts in the New Testament 10 times it is mentioned with a promise.
Revelation 2:7 He that hath an ear, let him hear what the Spirit saith unto the churches; To him that overcometh will I give to eat of the tree of life, which is in the midst of the paradise of God.
Revelation 2:11 He that hath an ear, let him hear what the Spirit saith unto the churches; He that overcometh shall not be hurt of the second death.
Revelation 2:17 He that hath an ear, let him hear what the Spirit saith unto the churches; To him that overcometh will I give to eat of the hidden manna, and will give him a white stone, and in the stone a new name written, which no man knoweth saving he that receiveth it.
Revelation 2:26 And he that overcometh, and keepeth my works unto the end, to him will I give power over the nations:
Revelation 3:5 He that overcometh, the same shall be clothed in white raiment; and I will not blot out his name out of the book of life, but I will confess his name before my Father, and before his angels.
Revelation 3:12 Him that overcometh will I make a pillar in the temple of my God, and he shall go no more out: and I will write upon him the name of my God, and the name of the city of my God, which is new Jerusalem, which cometh down out of heaven from my God: and I will write upon him my new name.
Revelation 3:21 To him that overcometh will I grant to sit with me in my throne, even as I also overcame, and am set down with my Father in his throne.
Revelation 21:7 He that overcometh shall inherit all things; and I will be his God, and he shall be my son.
Hebrews 11:8 By faith Abraham, when he was called to go out into a place which he should after receive for an inheritance, obeyed; and he went out, not knowing whither he went.
Hebrews 11:9 By faith he sojourned in the land of promise, as in a strange country, dwelling in tabernacles with Isaac and Jacob, the heirs with him of the same promise:
Hebrews 11:10 For he looked for a city which hath foundations, whose builder and maker is God. 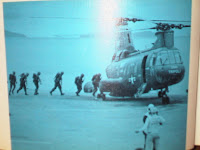 Posted by SHIELD OF FAITH MINISTRIES at 9:50 PM