The issue of our society accepting the "SODOMITE" lifestyle as a normal state of being to stand alongside the heterosexuality is not a 'SIDESHOW"...but the "MAIN-EVENT"...because it corrosive degradation of GOD'S CREATION is both degenerative and terminal to any society that has historically taken it in. I'm a minister originally from Kansas
City,Mo. in my time as outreach pastor at a large multiracial intercity church I coordinated the activities of 300+ volunteers...street ministry, prison ministry,homeless ministry,alcohol and drug recovery,nursing home ministry, and founded the first chapter of "EXODUS INTERNATIONAL" in the state of MISSOURI a ministry helping those bound by this corrupt "death-style"through the power of the GOSPEL OF JESUS CHRIST break
free....my coordinator was Brother John Kupka.

please read the following note from one of my earlier  postings.......

In a a book written in the early 80's called the "AIDS COVER-UP"by
GENE ANTONIO...researchers and many doctors predicted unless the "QUARANTINE PROTOCOLS"for such a "SYNDROME"were instituted this could very well....

1. EXPLODE INTO A THREAT TO ALL MANKIND BECAUSE IT WAS THE FIRST "RETROVIRUS" TO JUMP THE "SPECIES BARRIER".

2. IT WOULD DESTROY OUR HEALTHCARE SYSTEM BECAUSE OF THE IMMENSE COSTS IT WOULD TAKE TO FIND A CURE OR TREATMENT FOR SOMETHING NEVER SEEN BEFORE. This began the MANHATTAN PROJECT of modern medicine. The effort was to stop the mind blowing speed this virus was showing at the time it was 99% fatal,and the patient died within two years. BIG PHARMA WAS ALL OVER IT CONGRESS BOWED TO MAKING AN INFECTIOUS DISEASE "POLITICAL" AND WAS NOT ABLE TO COME UP WITH A CURE AND STILL HAVEN'T. BUT AS USUAL
THEY CAME UP WITH A VERY EXPENSIVE "TREATMENT" COMPRISED OF AN "ANTI RETRO VIRUS COCKTAIL" WITH A $5,000 A MONTH PER PATIENT PRICE TAG.  SINCE HOMOSEXUAL ONLY COMPRISE LESS THE AT THE TIME 5% OF THE POPULATION THEY HAD A PROBLEM ON "HOW TO RECOUP THE COST"...IF YOU REMEMBER THE LATE 80'S AND EARLY 90'S WAS THE PERIOD THAT WE SAW THE "SKYROCKETING" PRICES OF Rx DRUGS. INSURANCE AND MEDICARE AND MEDICAID WERE ROCKED AND SO BEGAN THE "HEALTH CARE CRISIS"....SODOMY HAS A COST!!! WHAT THEY DO BEHIND CLOSED DOORS IS THEIR BUSINESS,BUT IF "COMING OUT OF THE CLOSET" DESTROYS THE BEST HEALTHCARE SYSTEM ON THE PLANET THEN IT BECOMES AND ISSUE OF "PUBLIC POLICY"....BECAUSE WE ALL HAVE TO PAY FOR THEIR RIGHT TO DO WHAT IS NOT "BIOLOGICALLY" OR "ANATOMICALLY" NATURAL.... 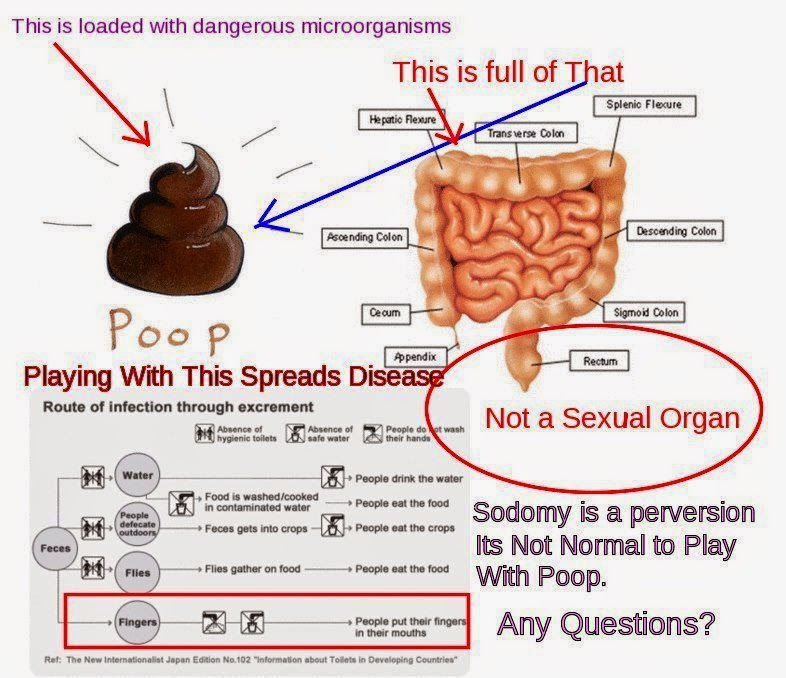 One of my volunteers was brother Lee Orr a veteran Kansas City Kansas homicide detective who was well known for his successful investigation. He shared with me back in 1988 how when they came upon a crime scene they could tell if it was the act of an enraged HOMOSEXUAL by how the victim was killed...the more mutilation,and abnormal violation pre-death and post mortem was a finger print that "NEVER"was wrong. These crime scenes were an example of the "DEMONIC RAGE" released by the individual. My point is in line with Ambassador Keyes warning...the unnatural desire for recognition based upon "sexual" preference boarders on the psychotic to the point it has to find a release. The inability to "PROCREATE"..yet like all living being a drive to "Multiply" is only satisfied by "RECRUITING", "PERVERTING","LYING" AND "MANIPULATING"...This
"community's" success permeates every area of life from crib to grave. It is the ultimate sign of social decay in any culture...a "DEATH SENTENCE" IF NOT CHALLENGED.TO OUR NATION, OUR CULTURE, OUR PEOPLE.
S  E  L  A  H

Posted by SHIELD OF FAITH MINISTRIES at 6:16 AM