USURPER IN CHIEF...WHO IS THIS MAN? 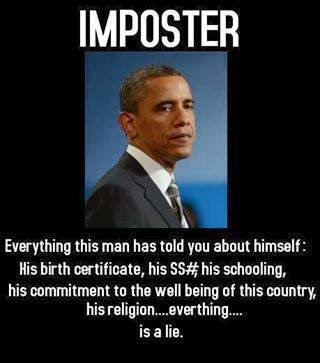 NO... you don't need the Senate to arrest for fraud and usurpation...and Treason. He is not the LEGAL PRESIDENT...NEVER HAS BEEN...STOP COMPLICATING SOMETHING THAT IS AS SIMPLE AS BRINGING "R.I.C.H.O" CHARGES AGAINST THE WHOLE ROTTEN ADMINISTRATION MACHINE IF IT WAS GOOD ENOUGH FOR THE FIVE MAFIA FAMILIES OF NEW YORK AND THE "TEFLON DON"....Just do it!!  IMPEACHMENT IS JUST AN EXCUSE FOR THE "COWARDS" IN CONGRESS You know sooner or later...you will run out of excuse for this corrupt perverted impostor,it will come home when a loved one gets hit in one way or another with the results of this FEDERAL CHICAGO MACHINE'S LIES effect some area of your life. I don't care what the area of life his filth and corruption has cast it's shadow...spiritually,educationally,medically,national defense,economically, and then last but not least most of your Constitutional rights GONE!!!!   You know it's hard to believe that the vast majority of those on FACEBOOK opposed to OBAMA'S destruction of our nation still believe it's because of his "INEXPERIENCE", his experience or lack thereof has nothing to do with what he has done to this nation. This was his plan from the very beginning his radical team of advisers entered the White House with their "END GAME" in mind...and it has succeeded beyond their wildest dreams and no one is in prison or fired yet....and the wheels of this treasonous plan keep turning and accelerating. Treason is being committed openly with the help of the Mainstream Media...our nation is being disemboweled  from within...as "Berry" fund raises with his communist supporters and plays golf in PALM SPRINGS. IT HAS TO STOP......but alas the JUDGE OF THE UNIVERSE HAS GIVEN THIS NATION TIME TO REPENT, HE DREW A LINE IN THE SANDS OF TIME AND WE MAY HAVE CROSSED IT ALREADY READ THE BOOK OF ISAIAH THE THIRD CHAPTER AND SEE WHAT HAPPENS TO A NATION THAT FORGETS GOD....THEN TURN ON YOUR TV....The fact is blind obedience to the status qua will probably end with the loss of millions of lives as those who understand that the HOUSE OUR REPUBLIC HAS BEEN DIVIDED BY A "TRAITOR IN CHIEF" BARRY SORORTO aka BARRACK HUSSEIN OBAMA. A HOUSE DIVIDED AGAINST ITSELF SHALL NOT STAND. THE SAD PART IS ONLY 10-15 PERCENT OF THE BLACK POPULATION CAN SEE IT, AND DON'T UNDERSTAND THE SOPHISTICATION OF THE THIS MAN'S MOTIVATION. IT IS ALIEN TO OUR CULTURE,THIS MAN'S WHOLE BACKGROUND IS A MYSTERY FROM BIRTH TO GRADE SCHOOL TO HIGH SCHOOL TO COLLEGE...HE HAS SEVERAL DIFFERENT SOCIAL SECURITY NUMBERS, AND HIS DRAFT CARD IS A FRAUD. MULTI-MILLION DOLLAR LAW FIRMS WERE HIRED BEFORE THE ELECTION TO HAVE ALL OF HIS "HISTORY SEALED"!!! WE DON'T EVEN KNOW WHO HE IS!!!  WAKE UP!!! HE WAS RAISED BY WHITE ACTIVISTS COMMUNIST/SOCIALIST, TRAINED IN STREET LEVEL COMMUNITY ACTIVISM,RAISED AND EDUCATED AS A MUSLIM, ATTENDED A CHURCH FOR A PSEUDO CHRISTIAN PASTOR WITH A "NATION OF ISLAM BACKGROUND" AND HATRED FOR AMERICA AND WHITE PEOPLE IN GENERAL. THIS MAN IS A SOCIALIST FIRST,MUSLIM SECOND,AND "BLACK" WHEN IT'S CONVENIENT. SELAH Still a DEMOCRAT? OH WELL...YOU CAN'T FIX STUPID....SELAH
Posted by SHIELD OF FAITH MINISTRIES at 6:54 AM