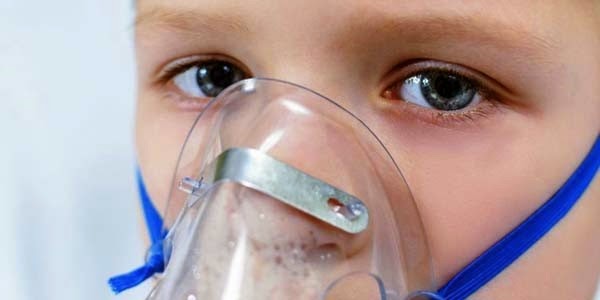 Just weeks after the Obama administration let more than 37,000 illegal-alien children into the U.S. without health screening, more than 1,000 kids across 10 states have been stricken with a respiratory virus – prompting widespread concerns about a major outbreak sweeping across the nation.On his Monday show, talk-radio host Rush Limbaugh explored the possibility of a link between the flood of illegal aliens and the spread of a severe and rare respiratory virus known as Enterovirus D68, or EV-D68.“Obama will not tell anybody where all of the children that have crossed the border in the last four months have been relocated to,” Limbaugh said.“There are a bunch of people who want to know. We had these kids cross the border from El Salvador, Guatemala, Nicaragua, wherever they came from in Central America, and they were processed real quickly. They were gotten in, gotten out, and they’ve been distributed all over the country. And Obama won’t tell anybody where he put ‘em. … The regime will not announce where they are.”Limbaugh asked, “Are the two stories related or are they not? Does this sweeping, mysterious virus that’s multiplying across the Midwest, does it have anything to do with it or not? We don’t know. That’s the answer. We just don’t know. But some people think there may be some kind of a connection.”Another talk-radio giant, Michael Savage, blasted Obama for releasing the illegal-alien children in all 50 states: “This population in America, which once enjoyed the greatest health on earth, is now being devolved into a second-world nation in terms of health because Obama is so corrupt, was so ignorant, was so evil that he’s taken what was once the greatest nation on earth and devolving us into a second nation status.”Savage, who earned a doctorate in epidemiology at the University of California at Berkeley, declared on his show Monday, “For 20 years, I’ve been trying to warn America about the unscreened immigrants being brought in. Now, of course, it’s coming home to roost and the American people are being lied to by the Centers for Disease Transmission. They used to be the CDC; they’re now the CDT.“Instead of stopping disease spread, they’re encouraging it by not speaking out against bringing in infected children and putting them in our public schools, right? It’s astounding to me what they can get away with because of the ignorance of the public. Common sense is gone. … What do you expect to happen if you put a kid with a certain virus into a school where they’ve never been exposed to that virus? It’s called an epidemic breakout.”

The U.S. Department of Health & Human Services’ Office of Refugee Resettlement has released a state-by-state breakdown of 37,477 unaccompanied children released to sponsors across America.Five states where the federal government released the most children include:
Texas: 5,280 children
New York: 4,244 children
California: 3,909
Florida: 3,809
Virginia: 2,856
The states currently impacted by the outbreak include Missouri, Colorado, Georgia, Illinois, Iowa, Kansas, Kentucky, North Carolina, Ohio and Oklahoma – states that have received some of the smallest numbers of illegal-alien minors under the program.
The following map illustrates the virus outbreak in the Midwest and the number of children each state has accepted: 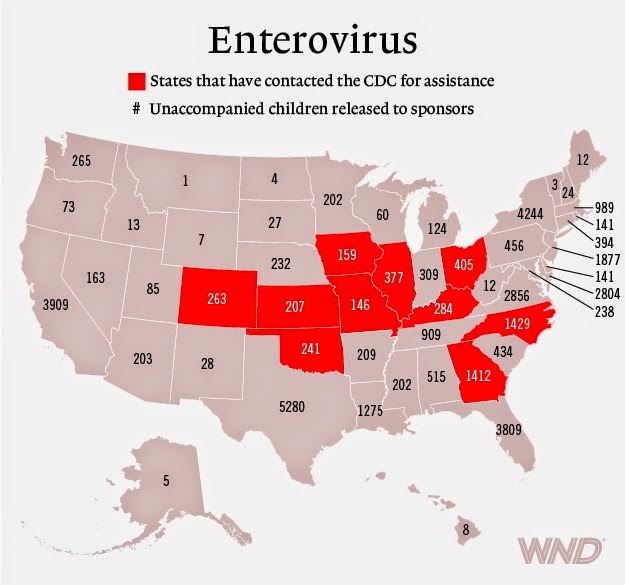 Read more at http://www.wnd.com/2014/09/americans-fret-about-mystery-virus-and-illegal-
Posted by SHIELD OF FAITH MINISTRIES at 5:58 AM