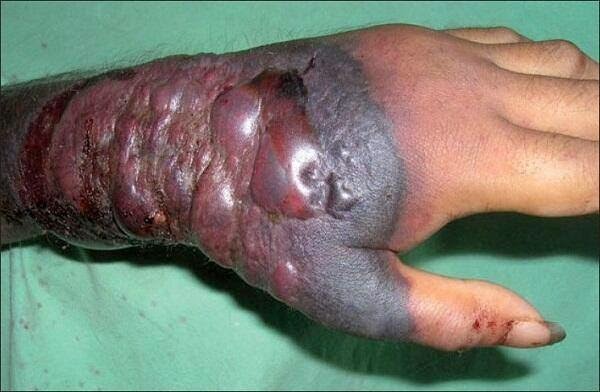 Ebola spreads through coughing and sneezing much like influenza, which most experts agree is spread “mainly by droplets made when people with flu cough, sneeze or talk,” according to documents by the Centers for Disease Control and Prevention.

A new CDC flyer describing the “droplet spread” of Ebola, which “happens when germs traveling inside droplets that are coughed or sneezed from a sick person,” is nearly identical to the CDC’s description of influenza which states “most experts think that flu viruses are spread mainly by droplets made when people with flu cough, sneeze or talk.”

“Droplet spread happens when germs traveling inside droplets that are coughed or sneezed from a sick person enter the eyes, nose, or mouth of another person,” the CDC Ebola flyer states, which was released on Monday. “Droplets travel short distances, less than 3 feet (1 meter) from one person to another. A person might also get infected by touching a surface or object that has germs on it and then touching their mouth or nose.”

This flyer superseded a previous document on Ebola transmission by the CDC, dated Oct. 16, which said nothing about the droplet spread of Ebola, instead claiming that “Ebola is not spread through the air.”

It appears the CDC is backtracking from its prior statement and is now slowing admitting that Ebola can spread through coughing and sneezing.

Similarly, in another document entitled “How Flu Spreads,” the CDC reveals the droplet spread of the flu is very similar to that of Ebola.

“Most experts think that flu viruses are spread mainly by droplets made when people with flu cough, sneeze or talk,” the CDC states. “These droplets can land in the mouths or noses of people who are nearby or possibly be inhaled into the lungs.”

“Less often, a person might also get flu by touching a surface or object that has flu virus on it and then touching their own mouth or nose.”

So, in summary, the droplet spread of Ebola is almost identical to that of influenza, according to the CDC, which also released new guidelines on Monday stating that people are at risk for contracting Ebola if they are “in the same room for a brief period of time” with an Ebola patient.

“The new guidelines also list ‘fatigue’ as a potential Ebola symptom, while individuals who had direct contact (such as a hand shake) with an Ebola victim prior to symptom onset in the victim are also now considered a risk, suggesting that the CDC is entertaining the possibility that the virus can be transmitted even from victims who have yet to display symptoms,” Paul Joseph Watson wrote.


And it’s interesting to note the CDC’s “How Flu Spreads” web page also states “you may be able to pass on the flu to someone else before you know you are sick.”

U.S. Army scientists demonstrated that the airborne transmission of Ebola was possible “at lower temperature and humidity than that normally present in sub-Saharan Africa” in a 1995 study, and they said the high temperatures and humidity present in Africa “may have been a factor limiting aerosol transmission of Ebola virus in the African epidemics.”

Posted by SHIELD OF FAITH MINISTRIES at 8:08 PM