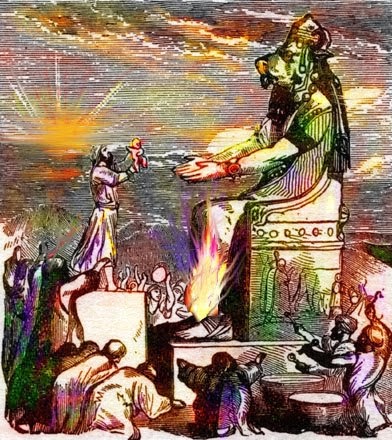 Michel de Montaigne was a French aristocrat widely known as one of the early progenitors of secular humanism. In his “Essays,” he dwells at some length on the wide disparity of moral codes that have governed societies at different times and places in the experience of humanity. He aims to make it hard to avoid the conclusion that there is hardly an evil under the sun that has not been considered noble and praiseworthy, or else required as normal and acceptable, in some society or other, at some point in that experience.

Some would argue that this observation casts doubt on the assumption that there are any “laws of nature and of nature’s God” that reflect a standard for human existence. Be that as it may (and I hold, with the prevalent view of America’s founding generation, that it is egregiously false), the self-contradicting variety of human societal norms undoubtedly invalidates the assumption that a good standard of justice can be erected upon the shifting sands of human consensus and compromise.

The 20th century is littered with examples of massive evil perpetrated by people who were celebrated, at the time, as heroes of the “volk” or of the “Revolution,” as just avengers, or godly warriors, for perpetrating what we now call “crimes against humanity.” But even when thusly described, it is necessary to ask how humanity becomes a standard for just action when whole societies of men are capable of applauding characters of unimaginably depraved criminality and/or revering them as living stelae that mark the way to higher planes of human existence.

The people of the United States are in the midst of an era of ominous moral turmoil that questions our judgment in exactly these terms. In the name of human equality, love and compassion, a supposedly enlightened elitist clique is abusing the name of law to force the people at large to accept sexual and other practices deprecated by human reason and/or religious sensibility even before the end of ancient times. In all the courts and offices of government where they have sufficient power, this elitist clique is advancing to a place of honor things like child sacrifice, homosexuality and self-murder. Pedophilia, sadism and law-enforced religious persecution are commencing to petition for equal pride of place. In the course of this campaign, the understanding of law that insists upon its moral purpose and effect is being poisoned at the root.

CNN anchor Christopher Cuomo’s recent overt attack against the Declaration of Independence is a bolder manifestation of this campaign than I have seen before. The elitist faction’s strategy against the Declaration has heretofore aimed to inflict death by a thousand cuts, inflicted indirectly. The moral principles set forth in the Declaration have an indispensable role in the conception and perpetuation of our democratic-republican form of government. So why are Americans willing to suffer pundits like Christopher Cuomo to dismiss out of hand the Declaration’s premise of God’s transcendent authority, which justifies constitutional government, of, by and for the people?

Some are no doubt shortsighted enough to believe that the political exile of God enlarges their “freedom.” They at least tacitly applaud the understanding that freedom is the license to do as we please and prevent others from interfering with, or even disapproving, our actions. But even as individuals most of us outgrow the conviction that such freedom is really consistent with our happiness. We should be even more inclined to do so when dealing with its grave implications for society as a whole. What is the price of such licentious freedom? And, the more important question for our political liberty, when the internal force of moral constraint is banished, will it be possible to impose any effective limit upon the activities of those who can afford to pay that price?

It is a mistake to read the first question as if it were the basis for some kind of social science research project. It is meant literally. The rich and powerful often say, as if from their own experience, that everyone has a price, a form of remuneration in exchange for which they will do whatever some purchaser demands. The fact that prostitution is as old as the cavernous hills (and not just in the sexual sense) leads common sense to nod reflexively in agreement. But it should also warn us of the degradation of the human person the maxim implies. Once it is simply allowed to be true, those who have sufficient wealth and power are free to procure marionettes to service all their whims and passions, however criminal and unjust, with no a priori limit except the extent of their resourceful power and will.

That’s because, for what they regard as sufficient remuneration, too many people will gratefully sell themselves or others into slavery, even unto death. It is a fact that has proven true so often, (for example, in the event of conquest) that it has falsely been regarded as a source of right. If you think this through it soon becomes evident that the rule of “consensus and compromise” Chris Cuomo cites as the only source of law in America, actually masks the domination of those who have the wealth to buy consensus and/or the power to impose submission by force and intimidation, and then claim that it’s a compromise.

Discard the God-acknowledging principles of the Declaration and this is what America will be left with – which is exactly why powerful forces are at work in politics, the courts and the media to produce that result. This is a far cry from what America’s founders had in mind. They sought to harness the distinctively human forces of natural right endowed by God – such as conscience, faith and a sense of decency – to keep the force of raw power within bounds, thereby giving the exercise of right a chance to flourish. [In the whole of this essay, which I am making available in a series on my blog, I examine the role of the natural family as the sustaining paradigm for society and government based on the exercise of God-endowed unalienable right. In the elitist faction campaign to overthrow America's constitutional self-government, it is under strenuous attack, precisely because of that role.]
Posted by SHIELD OF FAITH MINISTRIES at 9:06 AM